If you have worn Kimono, a traditional clothing mostly worn by women but men’s version is also available, you probably put on Tabi on your feet. If you have experiences on participating in matsuri festivals where you carry Mikoshi or Danjiri, or performed traditional or modern dances, there should be good chances you put on Jikatabi as you enjoy those moments. Tabi (or Jikatabi) are traditional footwear very unique and only worn in Japan. Let’s take a look at the history.

We humans created footwear in order to protect our feet from the cold weather, heated ground in the summer, or sharp rocks and stubbles. In ancient times people created sandals by strapping ropes on animal skin boards. In Japan archeologists have found wooden boards, called “Tageta”, with protrusions that were gripped by toes to be used as work footwear on the rice fields. The Japanese then started weaving hay straws to make sandals called “Zori”. They added long straps on Zori so that the heels were more secure and could endure long distance walking. They called it “Waraji”.
To protect the feet from the cold air or even snow when they wear Waraji in winter, the Japanese created Tabi socks out of animal skins. Tabi (足袋) literally means”foot bag”, (足-foot 袋-bag). To have the strap securely held by toes, the shape of Tabi naturally became split between first and second toes. The materials were changed to cotton during Middle Ages when the cultivation of cotton became popular.

“Shoes” were also considered the symbol of authority in many cultures since the ancient times. In West, Bishops and high ranking officials wore fancy or conspicuous leather or wood shoes with sometimes very high heels. In Japan religious leaders and aristocrats wore special wooden or cloth shoes with thick soles. In Europe, the culture of wearing shoes spread into the general public, however, in Japan most people still wore sandal-type footwear such as Zori or Waraji. We do not know exactly why leather shoes remained uncommon in Japan up to modern times. The low availability of leather materials, humid climate, and lifestyle of not wearing footwear indoor might be the reasons.

In Edo period (starting 1603), farming of cotton were wide spread, and Cotton Tabi were made not only for the protection from the cold air or dirt, but also as a part of formal clothes. Special techniques such as Unsai Ori in Okayama were invented, and thicker and more durable, yet comfortable Tabi became very popular. By the end of Edo period to early Meiji period (1860’s to 70’s), metal hooks called “Kohaze” were invented and used to tie the heel side of Tabi, which is similar to modern days Tabi. Kurashiki became one of the top Tabi production areas in Japan thanks to broad cotton fields spread over the area.

On a side note, although Unsai Ori was mostly used for Tabi production at first, the technique was later introduced to manufacture military uniforms, and then student uniforms after the war. The technique further developed into producing Denim. The origin of famous Kojima Denim came from Tabi materials.

Marugo Company was established 1919 in the name of Marugo Tabi Company to start an integrated production of Jikatabi. Tabi was a great product of the area and rubber was a very late material just introduced in Japanese Industry. The Company combined these two products and created a new product of Jikatabi.

We are proud of our tradition succeeded from the establishment, at the same time, put importance on innovative efforts to create new value. We strive to have good communication with our customers, business partners, and local and global community to co-create brighter future. 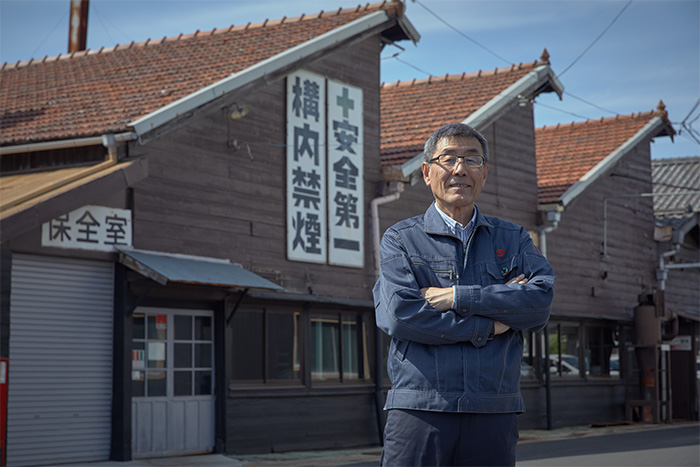